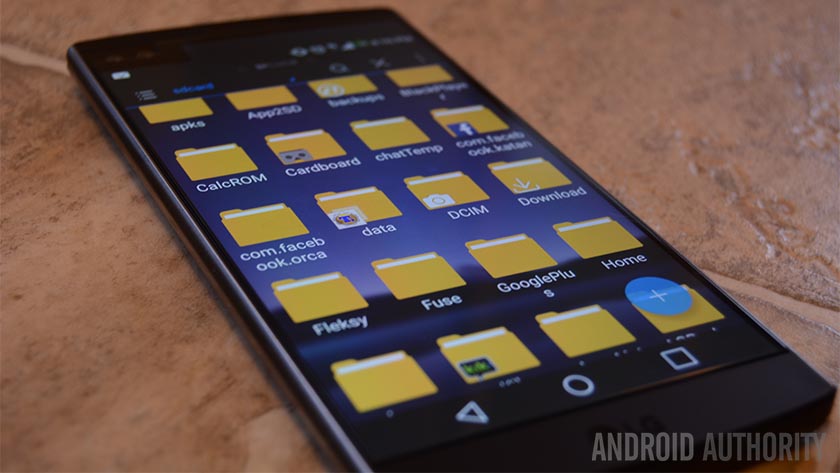 File manager apps are among the most important apps on your device. With them, you can browse your files, find your downloads, manage your storage space, move things around, and a lot more. Not everyone is too keen on file organization because it can be pretty boring, but it still must be occasionally done. Here are the best file explorer apps, file browser apps, and file manager apps for Android.

Before we begin, we’d like to note that Google is introducing Scoped Storage for file browsers. The implementation has been a bit inconsistent. Thus, for the next year or so, expect to see more bugs when dealing with SD card storage than you would normally see until Google and the developers get everything straightened out.

Amaze File Manager is a newer app comparatively speaking and it’s pretty good. It’s open-source and focuses on a lighter experience for those who just need to do some light file browsing. It features Material Design, SMB file sharing, a built-in app manager to uninstall apps, root explorer, and more. It managers to include the most important stuff without feeling bloated. It’s free to download and use with optional in-app purchases in case you want to help fund development.

Astro is one of Android’s oldest file manager apps. It had its ups and downs over the years. However, it’s always been a solid choice. Some of the features include SD card support, cloud storage support, file compression, app management, and archive extraction support (ZIP and RAR). You also get a good-looking, Material Design UI and simple usage. It’s also entirely free with no ads. The app underwent an ownership change. It’s been kind of a so-far-so-good kind of deal, but we’ll monitor as time goes.

Cx File Explorer is a good, basic file browser. It features a relatively modern UI, all of the basics, and support for many cloud storage services and shared storage servers (FTP, SMB, etc). In particular, we like parts of the dashboard where you can easily find stuff like your SD card, main storage, download folders, or easily browse network drives. It includes an app manager as well and it seems to work okay. It’s not the most powerful on the list, but it’s definitely among the best free file browsers with no in-app purchases or ads.

FX File Explorer is a newer file manager comparatively speaking. It has all of the usual features. That includes various functions for your media and files, multi-window support, support for network storage like FTP, and even support for encrypted archived files. That’s a lot to take in, but FX Explorer basically does it all. You even get a text editor and its archive support works with less popular stuff like GZip, Bzip2, and 7zip. Best of all, it has no ads and it doesn’t track your devices. It’s a good choice for those switching away from ES File Explorer especially.

MiXplorer Silver is one of the newer file managers on the list. The feature list is quite impressive. You get the normal stuff like file browsing, archive support, support for cloud storage, and an HTML viewer. There are some niche features as well and those include EPub, MobiPlacket, and PDF reader support as well as file encryption. There are also a bunch of plugins that add even more functionality as needed. Thus, if you need more archive support and less PDF support, you can get the archive plugin and skip the PDF plugin. The app doesn’t have a free version, so make sure you try it before the refund time runs out to make sure you like it.

MK Explorer is another newer file manager option. It’s a simple option that doesn’t have a whole lot of flair. That is extremely preferable if you really just want something simple. It features a Material Design interface, the basic file management features (copy, paste, delete, SD Card support for Lollipop 5.0+), and root access. There is also support for 20 languages and it has a built-in text editor, gallery, and music player. This one is a bit older. Its last update was in 2016. We only recommend this one for devices running older versions of Android, like Lollipop or Marshmallow.

Root Explorer has been a favorite of root users for a long time. It’s not the most modern-looking app, but it gets frequent updates. Those updates bring a newer interface, more features, and better stability than its earliest incarnations. You’ll have unmitigated root access (as long as your device is rooted) to do as you please. That includes fun tools like an APK binary XML viewer, the ability to change a file’s owner or group, MD5 support, and more. There is a free version simply labeled Explorer. However, it’s more for typical use. Root Explorer is where it’s at, but if you like the company and want a non-root version, Explorer works too.

Solid Explorer has been growing in popularity and it’s easy to see why. It features Material Design, cloud support, root access, FTP, SFTP, WebDav, SMB, and CIFS support, archive and compression support, Chromecast support, and there are even theming options available. This is the absolute upper limit for how many features a file manager app can include before it can be considered bloated. You can try it out for free for a couple of weeks. It costs $1.99 after that. This is the one we recommend first. It might be the best one on Android.

Total Commander is one of the more powerful and highly rated file manager apps. It has pretty much any feature you could ask for, including network storage support, cloud storage support, plugin support, bookmarks, and other tools such as an included text editor. This one is quickly becoming a favorite of many, even if the design isn’t as current as some would like. Nevertheless, it is entirely free with no in-app purchases and no advertising. Thus, it’s hard to be too critical of things like looks. Give it a shot!

X-Plore File Manager is one of the more unique options on the list. It’s a forced dual-pane app which means you’ll be managing two windows at once pretty much all the time. This is kind of cool if you’re copy/pasting between folders or need to move files quickly. It also comes with support for various types of files, cloud storage, network storage (FTP, SMB, DLNA/UPnP), a built-in hex editor, root support, and plenty of other features. You can even view APK files as zips if you’re into that kind of thing. The only downside is that it looks like it was created back in 1995. Don’t let looks fool you, though. This app is seriously good.

If we missed any of the best file manager apps for Android, tell us about them in the comments. You can also click here to check out our latest Android app and game lists.
Thank you for reading. Try these out too:

Mountain of new Apple products leaked in software code, but are they real?

How to set a photographic style on iPhone

3 tools to improve your brand positioning