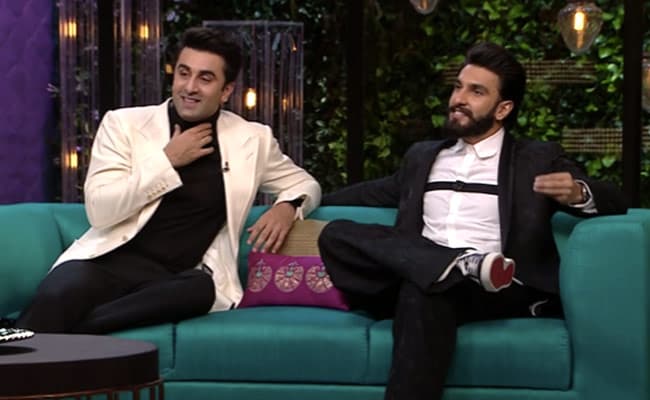 A still from Koffee With Karan Season 5. (courtesy: DisneyPlus Hotstar)

Those who have been wholeheartedly following Karan Johar’s talk show Koffee With Karan (KWK) must be on cloud seven now. The filmmaker is all set to return with the new season of his chat show but this time, it won’t air on a television channel but on an OTT platform – Disney+Hotstar. There is not only one but many reasons why Koffee With Karan is popular among fans. First, the inside gossip celebs share on the couch and second, the confessions they make about their personal and professional lives that often leave their fans shocked. The audience also gets glimpses of the bond prominent Bollywood stars share with each other once they appear on KWK.

Remember the time when Kareena Kapoor opened up about her relationship with her ex-boyfriend Shahid Kapoor and called him the “special someone” in her life? Or the time when Tiger Shroff confessed to crushing on Shraddha Kapoor? These are the moments that make viewers glued to their screen while watching Koffee With Karan.

Ahead of the new season of the show, which ran successfully from season 1 (2004) to season 6 (2019), let’s take a look at some shocking confessions made by B-town stars on KJo’s show.

1. Season 5, Episode 4: Ranbir Kapoor Confessed That He Slept With His Friend’s Girlfriend

Ranbir Kapoor might have earned the title of one-woman man now but his numerous rumoured relationships in the past always landed him in controversies. He was linked to many women and his confession on KWK made fans paint him as a Casanova. When Ranbir appeared on the show with Ranveer Singh, he was asked if he had sneaked around with his friends’ girlfriends. Ranbir confessed that he once slept with his friend’s girlfriend. Ranbir is now married to Alia Bhatt and the couple are expecting their first child.

Rarely do celebs open up about their personal, let alone sexual life, on television. But when Priyanka Chopra graced Koffee With Karan 5, she did not hold herself back and made thrilling confessions. During the Koffee Shots round, PeeCee revealed that she once kissed an ex after they had parted ways and that she likes phone sex.

3. Kareena Kapoor Made Her Relationship With Shahid Kapoor Official

In the first season of Koffee With Karan, Kareena Kapoor made an appearance with Rani Mukerji. Kareena, who was then dating Fida co-star Shahid Kapoor, had officially opened up about her relationship and confessed that Shahid was that “special someone” in her life. She was blushing every time she talked about Shahid on the show.

Even Alia Bhatt wouldn’t have thought back in 2014 that one day, she would marry Ranbir Kapoor and welcome her first child with him. When Alia was called on the show with Parineeti Chopra, she had openly confessed that since her childhood, she found Ranbir “adorable” and she wanted to “marry him.” Alia and Ranbir got married in an intimate ceremony in Mumbai on April 14 this year.

It wouldn’t be wrong to say that Katrina Kaif and Vicky Kaushal’s love story, just like the love stories of many other Bollywood couples, started on Koffee With Karan. In the fourth episode, when Katrina Kaif was asked to name an actor she thought she would look good with on-screen, she said: “Vicky Kaushal.” The audience also saw the Uri actor’s reaction to this, as after a couple of episodes, when he was told about Katrina Kaif’s statement, he appeared to faint on the couch.

Shah Rukh Khan and Gauri are one of the power couples of Bollywood. But in the first season of KWK, she revealed that they had once broken up because Shah Rukh was “too possessive.” She said: “I thought maybe it’s too young for us to decide anything to get married. So, I just took a short break. He was too possessive for me and I could not handle that” and added: “Later, I went back to him.”

7- Season 5, Episode 13: Tiger Shroff Revealed He Had A Crush On Shraddha Kapoor

Tiger Shroff revealed on Koffee With Karan that he and his Baaghi co-star, Shraddha Kapoor, went to the same school and he had a huge crush on her back then. Tiger appeared with dad Jackie Shroff on the show in season five.

Koffee With Karan Season will premiere on July 7 on Disney+Hotstar. In the US, the show will stream on Hulu.

“There Are Better Fast Bowlers In Indian T20 Cricket Than Shami”:...

“There Are Better Fast Bowlers In Indian T20 Cricket Than Shami”: Ricky Ponting

This Week Is All About Quality Over Quantity For...