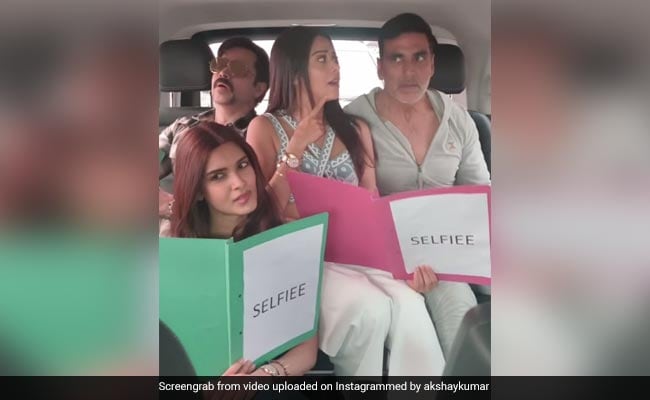 A still from a video posted by Akshay Kumar. (courtesy: akshaykumar)

Here’s some good news for Akshay Kumar fans. His upcoming film Selfiee has finally found its female leads. Can you guess who they are? Well, let us put an end to your speculation. Diana Penty and Nushrratt Bharuccha have joined the star cast. Akshay Kumar has shared a video featuring himself, Emraan Hashmi and the two actresses. They are sitting inside a car. The clip shows the four of them holding cards in front of their faces. The text written on these read “Selfiee”. Moments later, they put down the cards and we can see their faces. Then, they all start grooving to Selfiee’s theme song. The caption read, “With Nushrratt Bharuccha and Diana Penty joining in, the Selfiee squad is in full gear. What say Emraan Hashmi, ho jaye muqabla?”

Nushrratt Bharuccha has also announced the happy news on Instagram. Along with the same clip, she wrote, “All smiles always when surrounded with the best energy. Super excited to join the team of Selfiee.”

Diana Penty is also “super excited to hop onto this mad ride with the absolute bests by my side.” She wrote a fun note for her online family along with the same clip.

Meanwhile, Akshay Kumar’s Bachchhan Paandey has hit the theatres on March 18.  And, the actor and his co-stars, Arshad Warsi, Jacqueline Fernandez and Kriti Sanon, left no stone unturned during the promotion campaigns. Do you remember the time when the star cast boarded a train? Arshad Warsi and Akshay Kumar had shared videos from their journeys. And, we loved it. Akshay Kumar’s post saw him fumbling with the spelling of Jacqueline’s name. Take a look:

On the other hand, Arshad Warsi is enjoying his train ride to the fullest. His caption read, “I love train journeys.” Take a look at his fun video:

In fact, Akshay Kumar’s Bachchhan Paandey promotions also took the actor to the sets of comedian Kapil Sharma’s TV show. They also challenged the fans to undertake the “Bewafa challenge”. Here’s the video:

Akshay Kumar will next be seen in Prithviraj, which will also be model and Miss World 2017 Manushi Chhillar’s debut film.

“Can Always Look At Hindsight”: Rahul Dravid Opens Up On Decision To Not Pick R Ashwin For Edgbaston Test