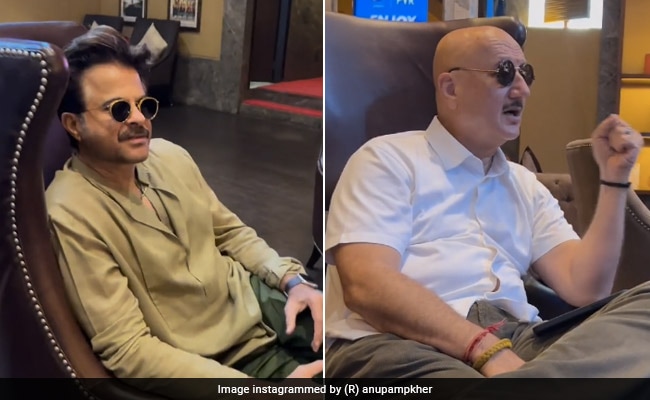 On Monday, Anil Kapoor and Anupam Kher went on a “movie date” and watched S S Rajamouli’s RRR in the theatre. Anupam Kher shared a video of the conversation that he had with Anil before the movie and captioned it as “Went to the theatre after many many years with my dearest friend @anilskapoor to watch @ssrajamouli #RRR. This hilarious conversation is before the film. Have fun & Enjoy. #Friends #JoyOfCinema.” Anil Kapoor reposted the video and wrote, “Movie Date” after a very long time with my friend The Anupam Kher! Watched the amazing #RRR and got some good wishes for #Thar & #JugJuggJeeyo from the 300cr club member himself! @anupampkher.”

The video starts with Anil Kapoor confessing, “We both have come to see a film, after many many years.” To this, Anupam Kher added, “Thousand years. We used to come for our own premieres.” Anil Kapoor then said, “Yes, you know I am feeling as if I am in St Xavier’s college, and that I am going out for a date.” Shocked Anupam said, “Sorry?”

Anil Kapoor then repeated, “I am feeling as if I have come out for a date.” Anupam Kher, who did not like the idea, replied, “I would not like to say that.” But Anil continued to insist and said, “No but a date with Anupam Kher. We are watching Rajamouli’s RRR. Are you looking forward to the film?”

Anupam Kher added, “I am very looking forward to RRR. I thought I have to have a conversation with him on the 6th.” Anil Kapoor then talked about his upcoming movie with his son Harsh Varrdhan and said, “But on 6th even Thar is releasing, so not only RRR publicity a little bit of Thar publicity should also be done.”

Check out the video here:

S S Rajamouli’s RRR released in March and broke many records. It was one of the highest-grossing films. RRR stars Ram Charan, Jr NTR, Ajay Devgn, and Alia Bhatt and made over Rs 1,100 crore worldwide.

“If There’s A Team That Can…”: Ben Stokes’ Bold Statement Ahead Of Fifth Test vs India