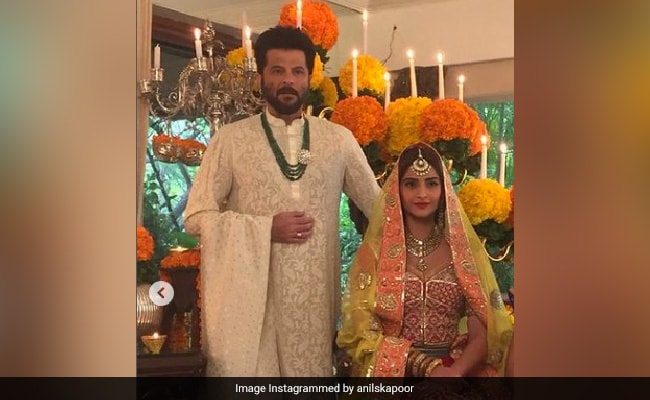 After Sonam Kapoor and Anand Ahuja announced their pregnancy on Instagram on Monday, Sonam’s parents Anil and Sunita Kapoor wished the parents-to-be. Anil Kapoor wrote in his post: “Now preparing for the most exciting role of my life – GRANDFATHER! Our lives will never be the same again and I couldn’t be more grateful! Sonam Kapoor and Anand Ahuja you have made us happy beyond measure with this incredible news.” Meanwhile, Sonam’s mom Sunita Kapoor wrote in her caption: “Of all the names I have been called am going to love being called NANI the best Yayy! Can’t wait to to be a NANI.”

This is what Anil Kapoor posted:

Sonam Kapoor married her longtime boyfriend Anand Ahuja in a big, fat wedding in May 2018, which was a star-studded affair. Anand Ahuja runs the fashion label Bhane and the sneaker boutique VegNonVeg. The couple currently stay in London.

Anil Kapoor and Sunita Kapoor got married in 1984. The couple first met on the sets of Meri Jung. Their daughter Sonam Kapoor is a renowned Bollywood actress. Their middle child Rhea is a film producer and runs an apparel brand Rheson with sister Sonam. The couple’s son Harsh Varrdhan Kapoor is also a Bollywood actor.

IKEA has a new (and cheap) shelf that you will want to buy...