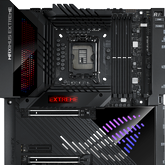 To be honest, I had huge doubts about whether I should deal with products such as the reviewed ASUS ROG Maximus Z790 Extreme. Top constructions for obscenely high money, it is a market niche and a much cheaper design would click much better. On the other hand, through the eyes of my imagination, I saw the indignation of readers who would expect to pour liquid nitrogen, because we test extreme equipment … However, I decided to take a chance, after all, we rarely see motherboards with high-end equipment spiced with an OLED display. Everything costs over PLN 6,000, but we also do not watch programs like Top Gear for shopping purposes.

ASUS motherboards belonging to the Extreme family are designs aimed at a very narrow audience, not necessarily even the most hardcore home-grown overclockers. They cost a lot of money, and overclocking has always been about squeezing excess performance out of average hardware, instead of spending a few extra thousand. Apparently, the approach of customers has changed, which producers immediately sensed and adapted their sales offer to the current situation. That is why such devices as the tested one are created ASUS ROG Maximus Z790 Extreme, which is uncompromising in the hardware and visual layer. The company has been releasing similar designs since the LGA 775 (Core 2 Duo) socket, so it kind of paved the way for ultra-cool models, the latest incarnation of which you can see today. However, Extreme in the name does not mean strictly extreme purpose, because ASUS ROG Maximus Z790 Apex is used for hardcore overclocking.

ASUS ROG Maximus Z790 Extreme looks like a complete design, containing everything you need not necessarily for hardcore overclocking. For 6000 zlotys, you can probably ask for that much. 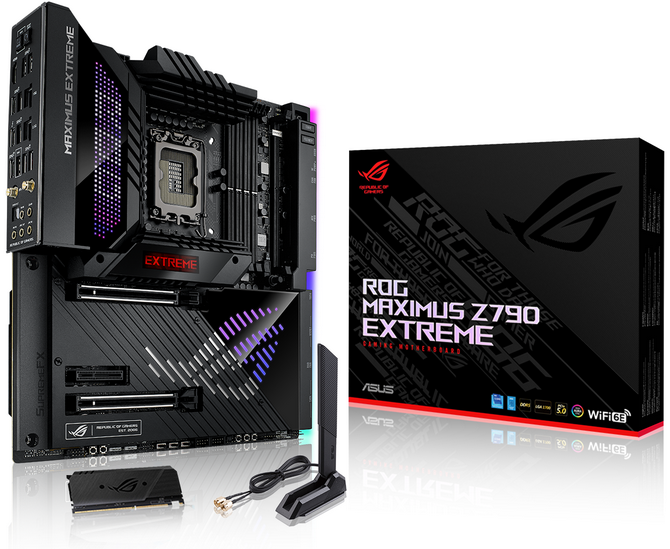 The Core Logic Portfolio for Intel Alder and Raptor Lake processors includes four models – H610 / / B660 / / Z690 / / Z790 – differing in the scope of functions, the number of available interfaces and ports. Traditionally, only the Intel Z690 / Z790 allow overclocking by manipulating the multiplier or the BCLK bus, although the latter is partly dependent on the hardware of the motherboard (select ASUS B660s allow BLCK adjustment). However, Intel has unlocked on the B660/H670 the ability to overclock the RAM beyond the controller’s maximum, which greatly increased the appeal of chipsets in the middle of the pack. However, no restrictions apply to manufacturers regarding the use of DDR5 / DDR4 standards, which is why we will find both H610 DDR5 and Z790 DDR4. The H610 / B600 models, however, have only 4 lines of DMI 4.0 and have no RAID support, and the weakest in the family is additionally castrated with PCI-Express 4.0, USB 3.2 Gen 2×2 and RAM divider adjustment. Differences between the Intel Z690 and Z790, however, can hardly be called significant, because they were limited to the reorganization of the PCI-Express line and USB ports – pure cosmetics.

ASUS ROG Maximus Z790 Extreme looks like a complete design, containing everything you need, not necessarily for strictly hardcore overclocking. To justify the extreme price of the latest flagship, the manufacturer did not regret the additional equipment, so the jet-black laminate was filled practically to the last centimeter. Potentially, it will be the most fancy motherboard designed for Intel Core 12th/13th generation processors. It’s also hard not to notice the massive amount of backlighting with the OLED display visible on the heatsink. All this, of course, costs dearly. However, contrary to assumptions, ASUS ROG Maximus Z790 Extreme is not the most expensive motherboard dedicated to the LGA 1700 platform, because the MSI MEG Z790 Godlike takes over PLN 8,000 from the wallet. Nay! Some models with the Intel Z690 chipset (especially with water blocks) are even more expensive, and the amounts reach PLN 10,000 for the ASUS ROG Maximus Z690 Extreme Glacial, which has not yet had a successor. Finally, let’s add that there is also an equivalent of the hero of today’s test dedicated to AM5 – ASUS ROG Crosshair X670E Extreme.