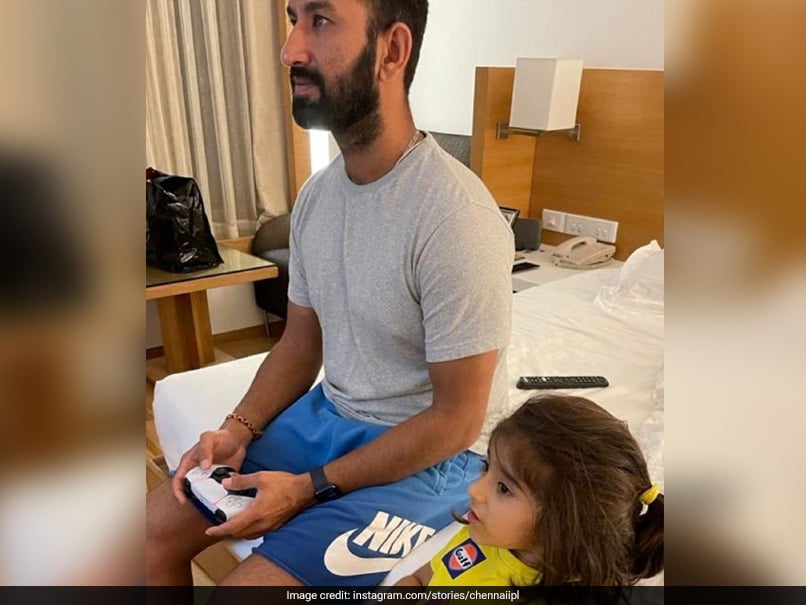 
Cheteshwar Pujara is spending some quality time with his daughter, Aditi.© Instagram


India’s Test specialist Cheteshwar Pujara is spending some quality time with his daughter, Aditi, ahead of the team’s long tour of England. Pujara is currently in quarantine in Mumbai with the rest of the Indian squad ahead of their departure for England. The long tour starts with India taking on New Zealand in the final of the World Test Championship (WTC) in Southampton from June 18. The right-handed batsman has found the perfect “quarantine gaming partner” in his daughter to utilise his free time in the bio-bubble. Pujara, on Monday, posted an adorable image with Aditi on Instagram Stories, using the hashtag “#QuarantineDiaries.”

In the photo, the father and daughter are seen with gaming consoles in hand, concentration writ large on their faces. Aditi is seen wearing a Chennai Super Kings (CSK) jersey.

Earlier, the Board of Control for Cricket in India (BCCI) had instructed India’s England-bound players to report in Mumbai on May 19. The Virat Kohli-led team would spend two weeks in quarantine in Mumbai and 10 days in isolation in Southampton, England. However, the players would be allowed to practice and train as the team would stay at a facility inside the Southampton stadium.

After the WTC final, Kohli and company will face England in a five-match Test series, starting from August 4.

In the Indian Premier League (IPL), Pujara was part of the CSK squad before the 14th season of the cash-rich league was called off by the BCCI after rising cases of COVID-19 inside the bio-bubble.

The 33-year-old Pujara returned to the IPL after seven years when he was bought by CSK in the players’ auction earlier this year for his base price of Rs 50 lakh. The last time he had played in the IPL was way back in 2014.

Despite his return to the mega event, Pujara did not feature in any of CSK’s matches this season. Overall, Pujara has played 30 games in IPL and scored 390 runs at a strike rate of 99.74. He has scored just one fifty and his average is 20.52.