It is not suitable for long tours, but it is not designed for that.

It ended yesterday in Las Vegas CES 2023 confirmed what could already be known by observing the trends of recent years: car and motorcycle manufacturers are now completely familiar guests at the army reviews of entertainment electronics companies.

This is no accident, since on the one hand, the spread of electric drive results in new and newer developments, and on the other hand, in our increasingly digitalized world, more and more IT solutions are also appearing in means of transport. At the large-scale event, vehicles such as the Volkswagen’s gorgeous camouflage-painted sedanthe The electric car jointly developed by Sony and Hondathe Peugeot’s four-wheeled razor bladeor the Italian Italdesign’s special boxwhich flashed the vision of the future of urban transport.

Yet they did not win the innovation award in the vehicle technology and advanced mobility category, but the Japanese ICOMA startup Tatamel Bike named electric engine – writes a RideApart. The special feature of the small machine is that it can be folded in a few movements, in which case it can even fit in the trunk of a car. The side panel of the engine – in the picture with a yellow and black stripe – can be replaced, so everyone can customize the appearance of the machine to their own taste.

Inspired by the Tatamel, produced by Honda between 1981 and 1983 Honda Motocompo small engine, which as a similarly compact machine was ideal for urban use. The concept of the electric motor, with its surprising appearance at first, was presented for the first time in October 2021, and the working prototype can now also be admired by CES visitors.

It does not hurt to be in good shape to lift it out of the trunk, as the Tatamel weighs 50 kilos – as a comparison, the Honda Motocompo was five kilos lighter. The maximum speed of the machine is 40 km/h, and its range is approximately 30 kilometers with one charge. Charging can be done easily from the socket, so there is no need to hunt for chargers.

A full charge takes about 3 hours, which is not lightning fast, but if someone uses the machine to go to work, even a completely empty battery could be charged two and a half times by the end of the working hours. It is currently equipped with a 12 ampere-hour battery, but ICOMA engineers are already developing it. the larger, 29 ampere-hour version. 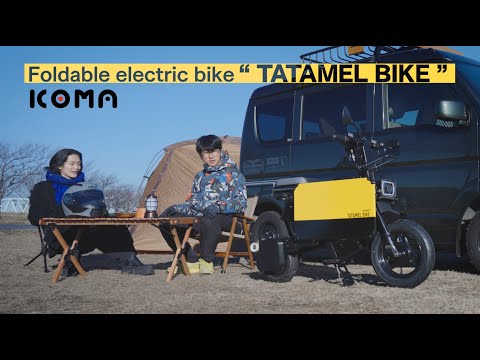 In addition to transportation, the electric motor can even charge our phone, and even a screen can be mounted on its side, although we do not fully understand what purpose this exactly serves, apart from the fact that it looks good in the concept video included in the article .

The price – innovation award here, compact size there – will be quite steep: you have to pay 3999 dollars, i.e. a narrow one and a half million forints, and since it is only made in Japan, the delivery will raise the price even more.