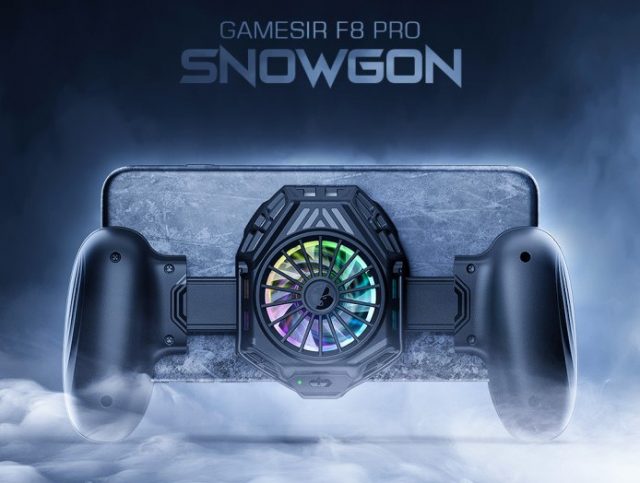 
One of the biggest issues when playing games on your smartphone is that your phone has a tendency to get a bit too warm. Unless you own something like the RedMagic 6 or ASUS ROG Phone 5 with its built-in fans, you’re kind of just stuck. Sure, you could stop playing for a bit, but where’s the fun in that?

Today, GameSir has announced a new Indiegogo campaign for the GameSir F8 Pro Snowgon. This mobile gaming grip attaches to your phone with ease but has a built-in cooling system to keep your phone from overheating.

Instead of connecting to your phone via Bluetooth or over USB-C, the Snowgon works with just about any smartphone and uses a stick-on joystick to provide some of the controls that you’ll need. Just use the joystick to run around, and the on-screen buttons in the game to do everything else.

As for that cooling mechanism, GameSir created this using five different elements:

But to give you a few more FPS while you’re playing, and give the competitive edge, there’s RGB lighting built right into the fan. The only catch with this entire ensemble is that in order to use the fan, it will need to be plugged in. That’s a bit of a bummer if you don’t want to carry a power bank around with you, but at least it’s there if you need it. GameSir also improved the grip to make the controller a bit more ergonomic than previous controllers and phone grips.

Pricing for the Snowgon is expected to start at around $45, but you can either back the Indiegogo campaign and get one for $35, or you can pre-order directly from GameSir for $40. Either way, you’ll save a few bucks and the Snowgon is likely to be released sometime in August.

Mercedes-Benz Hits Accelerator in E-Car Race With Tesla, Plans to Invest Over EUR...