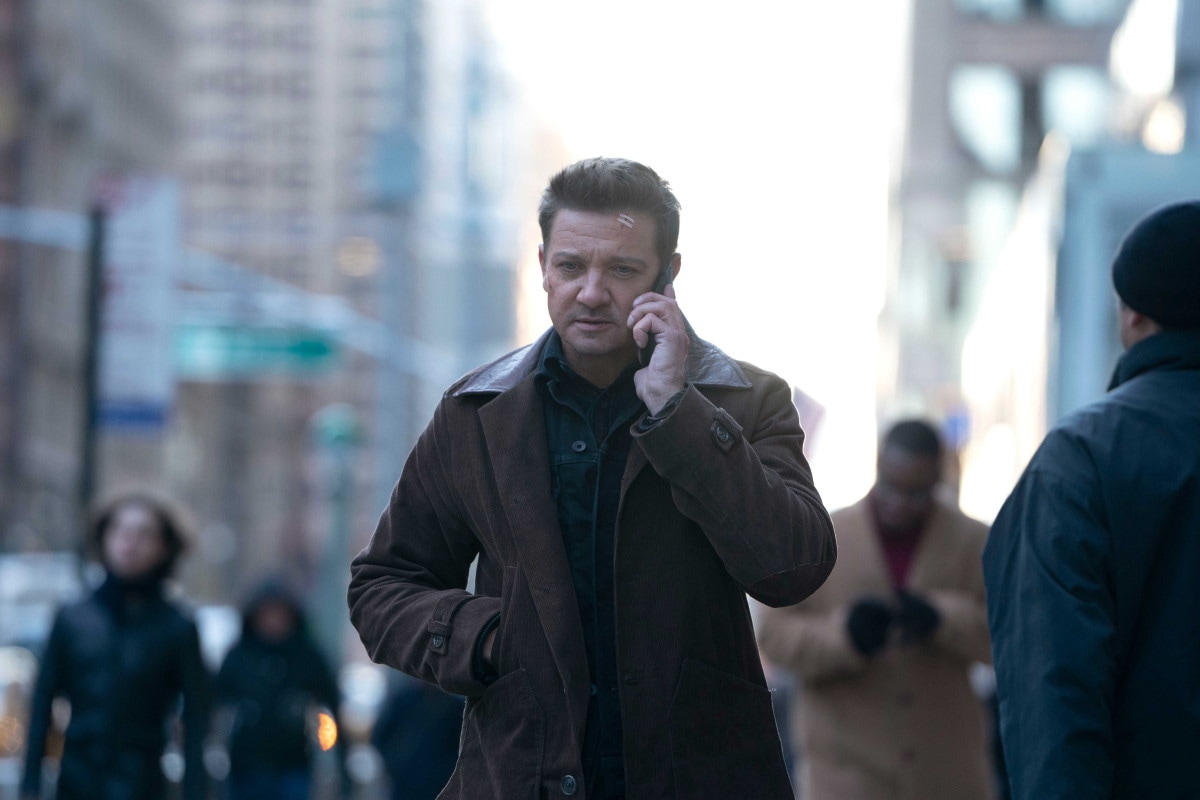 
Hawkeye is finally branching off on his own. After five supporting appearances across the Marvel Cinematic Universe — three of them Avengers movies — Jeremy Renner’s bow-and-arrow titular superhero is getting his own Disney+ series later this week. That makes him the last of the original six Avengers to get his own MCU project, in a manner of speaking. Robert Downey Jr.’s Iron Man, Chris Evans’ Captain America, and Chris Hemsworth’s Thor had a trilogy of movies. Scarlett Johansson’s Black Widow got her own movie earlier this year. One could argue that Mark Ruffalo’s Hulk has yet to get his own project, and you would be right, but The Incredible Hulk (with Edward Norton) is technically part of the MCU. And so here we are, at the end of that queue, with Hawkeye.

Speaking of, it’s seemingly end of the line for Hawkeye too. Just like Johansson’s Natasha Romanoff passed the torch in Black Widow and confronted her past, Hawkeye finds the former Avenger in a post-Endgame world doing the same (more reluctantly). Renner said in an official Hawkeye production diary: “He lost his whole family in the Blip, and then he took his pain and rage and sadness out on every bad guy on the planet. Everyone dealt with those losses in a different way — Clint went full-on vigilante. Justified or not, it’s a giant weight on him because he knew he was going outside the moral code of what he is. That’s where we start the series — things that happened in the past catch up to him.”

From Hawkeye to Dhamaka, What to Watch in November

But Hawkeye is not at all heavy. If anything, it’s the lightest of what Marvel has offered so far on TV. Inspired in part by Matt Fraction’s 2012–15 Marvel comic book run, the Disney+ series — created by Mad Men and Bridgerton alum Jonathan Igla — finds Hawkeye in New York City. “It’s six days till Christmas, and he’s in New York because he got invited to see a musical about Steve Rogers,” Renner said.

Feige added at the Hawkeye press conference: “This is fun because it is a Christmas story, and it is also based on early discussions about a limited time period. About setting a series in, not quite real-time, but essentially in a six-day period. Six episodes, six days. Will Clint make it home for Christmas? Which was fun and a breath of fresh air after world-ending stakes and Celestials bursting out of planets and multiverse shenanigans that this is, like Hawkeye himself, a grounded, family-based show.”

With that, here’s everything you need to know about Hawkeye.

The first two episodes of Hawkeye are out Wednesday, November 24 at 1:30pm IST / 12am PT on Disney+ and Disney+ Hotstar. One new episode will then drop weekly at the same time on Wednesdays for the entire six-episode run.

Hawkeye is also available in Hindi, Tamil, Telugu, and Malayalam on Disney+ Hotstar. It’s the first MCU series to be offered in Malayalam.

The Disney+ Hotstar plans have changed since the last Marvel series aired, so you won’t be limited in your language choices depending on the plan you have. That means you can watch Hawkeye in any language no matter which plan you’re on.

There are six episodes in total on Hawkeye. Each of them will run for about 40–50 minutes, it has been revealed. You can download all Hawkeye episodes on Disney+ and Disney+ Hotstar apps for Android and iOS.

The new Marvel series is led by Renner as Clint Barton/ Hawkeye. This is Renner’s sixth MCU project following the Christ Hemsworth-led Thor in 2011, the first get-together The Avengers in 2012, its follow-up Avengers: Age of Ultron in 2015, the mini-Avengers movie Captain America: Civil War in 2016, and the saga culminating chapter Avengers: Endgame in 2019.

“Out of all of the characters, it made sense for Clint Barton’s story to be told around this time of year because he’s a family guy,” Hawkeye executive producer Trinh Tran said. “He’s one of the few Avengers with kids, and after the fallout of what happened in Endgame — where he lost his kids for five years, became Ronin and got them back — this is the first Christmas that he’s going to be spending with his family. And the big question of the series is if he’s going to be able to make it home in time in order to do so.

“So there’s that big weight that he’s trying to figure out as he’s stuck elsewhere. He’s trying to deal with something that has put him on this mission and he has to figure out how to get out of it. And in terms of the light-heartedness, we wanted to show a different side of Clint that we haven’t seen before, in comparison to all of the Avengers movies that he’s in. And I find it so much more interesting that there is a version of Clint that is a little bit more humorous from the Matt Fraction run.”

Starring opposite Renner is Hailee Steinfeld — of Dickinson and The Edge of Seventeen fame — as the 22-year-old Kate Bishop. Steinfeld’s Bishop is expected to take over the mantle of Hawkeye.

“When we were talking about who would be the perfect candidate for Kate Bishop, names were thrown into the hat, and we all loved Hailee,” Tran said. “We think she’s tremendously talented. When she came in to meet, we knew right off the bat that she was the person we had been looking for all these years, once we had talked about who this person is and what she can bring to the table. Hailee did an incredible job, and we were all very happy with the onscreen Kate Bishop that she delivered.”

Barton and Bishop’s dynamic is at the heart of Hawkeye. As Steinfeld put it: “It really is a beautiful evolution of someone meeting their idol and being completely enamoured by that, and seeing this human underneath all of that. Seeing this person that wants to do good despite their past. It turns into, whether or not he’s willing to admit it right away, a partnership.”

Renner added: “She brings up a lot of difficulties in his life. She brings up a lot of problems in his life, and maybe even heals some parts of him. I think their relationship is one of the more beautiful things in this show that’s very grounded and connected. […] There’s a lot of shifts and changes, and ups and downs, and wonderful things and terrible things that happen. I think the archetypal energy of them makes them realise, like, how did these characters ever exist without each other?”

Beyond that, we have Vera Farmiga (The Conjuring) as Kate’s mother Eleanor Bishop. Tony Dalton (Better Call Saul) plays Jack Duquesne who is very close to Eleanor, as per images released by Disney and Marvel Studios. In the Marvel comics, Jack was a mentor to Clint at one point — but it’s unclear whether this will translate to Hawkeye.

Fra Fee (Les Misérables) essays the role of a mercenary named Kazi. Fans believe that this might be an origin story for the Marvel villain Kazimierz Kazimierczak / Crown who debuted in Matt Fraction’s comic book run.

And speaking of Black Widow, Florence Pugh will return as Yelena Belova, the sister-figure to Natasha Romanoff/ Black Widow (Johansson). Her involvement was announced last December — and then set up in the Black Widow post-credits scene, with the mysterious Valentina Allegra de Fontaine (Julia Louis-Dreyfus) assigning Barton as her next target.

Saturday Night Live alum Rhys Thomas directs half of Hawkeye, including episodes 1, 2 and 6.

He said: “There’s a strength of character in Clint that is so compelling. It’s a strength that he doesn’t wear on his sleeve either. It’s hidden underneath an imperfect and complex surface. Like all the best heroes, he’s unassuming. He doesn’t have a costume. He has no super power to hide behind or protect him. He’s an ordinary guy with an extraordinary skill, but it’s not as though that skill marked him as a guy who would help save the world. He’s good with a bow and arrow. His weakness — the side of his identity that’s wrapped in guilt and fear for those he loves — is something we can all relate to. How he deals with it and keeps coming back for more is what makes him Hawkeye.

Bert said: “[Hawkeye] suffered great loss, both in the Blip and when he lost Natasha. That set up a very interesting emotional starting point for us: to move forward, Clint would have to relinquish his past to let someone new in. So the depth we were able to mine in his character was a beautiful challenge, and in the hands of a multi-talented actor like Jeremy, we knew the fans would not be disappointed.”

Hawkeye creator Igla is the head writer on the Disney+ Marvel series. Additional writers include Elisa Climent, Katie Mathewson, and Tanner Bean. Other writers have not been revealed yet.

Igla and Thomas also served as executive producers on Hawkeye alongside Marvel Studios president Kevin Feige, Louis D’Esposito, Victoria Alonso, Trinh Tran, and Brad Winderbaum. Hawkeye is a production of Marvel Studios, with each episode reportedly costing as much as $25 million (about Rs. 186 crores).

The first — and as yet only — trailer (below) for Hawkeye was released in mid-September, revealing that it would be a Christmas show, a look at the Broadway play Rogers: The Musical, and setting up the dynamic between its leads.

Since then, we have had a series of half-minute and minute-long teasers: “Change of Plans”, “Event”, “Friends Partners”, “Branding Issues”, “Show Me”, and “Tricks”.

Other than that, Marvel Studios has also given us a behind-the-scenes Hawkeye featurette.

Marvel Studios’ “Hawkeye” is an original new series set in post-Blip New York City where former Avenger Clint Barton aka Hawkeye (Jeremy Renner) has a seemingly simple mission: get back to his family for Christmas. But when a threat from his past shows up, Hawkeye reluctantly teams up with Kate Bishop (Hailee Steinfeld), a 22-year-old skilled archer and his biggest fan, to unravel a criminal conspiracy.

The first reviews for Hawkeye should be available prior to premiere on Wednesday. An exact date and time is not known though.

Like WandaVision and The Falcon and the Winter Solider, Hawkeye has been designed as a miniseries so it’s highly unlikely that we will get a second season. That said, the story of the new Marvel series will continue elsewhere in a way. I’m talking about the aforementioned Echo spin-off series.

“As announced on Disney+ Day, the Echo series — as we see Maya Lopez go from the end of this series into that series — will be the next direct link,” Feige said at the Hawkeye press conference.

Here’s the official poster for Hawkeye from Disney and Marvel Studios:

<!-- -->A throwback of Katrina Kaif and Vicky Kaushal. (Image courtesy: vikykatrina)HighlightsKatrina and Vicky will reportedly get married on December 9 Vicky was...