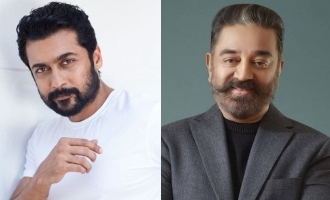 The ‘Vikram’ fever has reached a new high with only four days to go for the release on June 3rd. Kamal Haasan is promoting the new age action thriller like never before flying to all parts of the country and abroad setting a new benchmark. Demand for tickets is said to be the highest in recent times according to sources close to theater owners.

Apart from the three main leads of ‘Vikram’ namely Kamal, Vijay Sethupathi and Fahaadh Faasil, the film has the surprise element of top hero Suriya making an important appearance during the climax. Speaking on it Kamal stated that veteran actor Sivakumar is like an elder brother to him and his son Suriya considers him also as an elder brother as opposed to uncle.

Kamal revealed to DD the anchor that talks are on with Suriya to act in a Raaj Kamal Films International productions for a long time now. And its on those lines that Suriya was approached for ‘Vikram’ and he agreed to do it without hesitating even a bit.

The Ulaganayagan then broke the news that he and Suriya will join hands for a new film soon which will give immense pleasure to both of them. We have to wait and see if they are acting together in the new film or will be collaborating as actor and producer. Lets wait and watch.

BOE gets iPhone 14 OLED screen orders after all

Apple is in fact going to use OLED display panels made by Chinese company BOE for the iPhone 14 line, according to a...