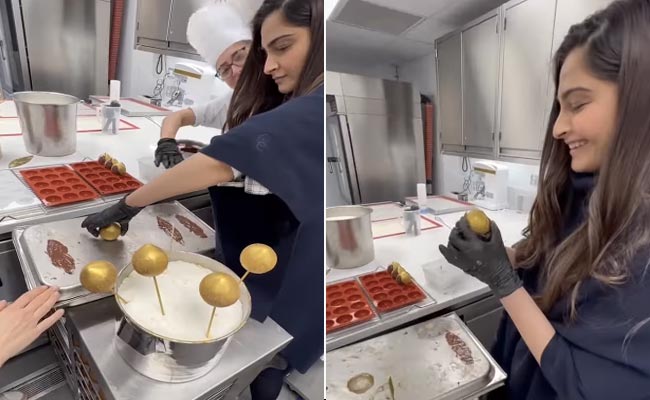 Sonam Kapoor is enjoying every bit of her maternity period and keeps her fans also updated by dropping alluring pictures or videos of what she is up to. Recently, she shared a video on her Instagram handle, wherein she can be seen preparing a delicious chocolate dessert. The actress is expecting her first child with husband Anand Ahuja in the fall. In the video, the actress can be seen in an all-black outfit, making a delicacy named Gold Hazelnut. In the background, we can hear a lady applauding Sonam’s brushing technique as she covers the chocolate with golden sparkles.

Towards the end of the video, Sonam Kapoor can be seen holding the dessert in her hand and saying, “Not great”. Sharing the video, she captioned it as “During my pregnancy I’ve been devouring cedricgrolet goodies! And my dearest friend booked a surprise for me at his patisserie”.

Here have a look:

In March, Sonam Kapoor and Anand Ahuja announced the pregnancy news with an adorable post. Sharing the pictures from the maternity photoshoot, Sonam wrote, “Four hands. To raise you the very best we can. Two hearts. That will beat in unison with yours, every step of the way. One family. Who will shower you with love and support. We can’t wait to welcome you. #everydayphenomenal #comingthisfall2022”

Meanwhile, on the work front, Sonam Kapoor was last seen in AK vs AK. Next, she will be seen in Shoma Makhija’s crime-thriller drama Blind. It is a remake of the 2011 Korean film with the same name. The film centres around a blind officer who is in search of a serial killer.