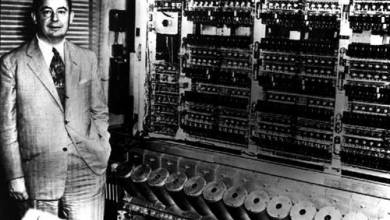 In 2023, on the 120th anniversary of János Neumann’s birth, the Neumann Society is preparing for a series of collective and open commemorations.

Neumann, one of the greatest scientists of the 20th century, achieved outstanding results in many scientific fields. In addition to basic research, he also dealt with their practical application. Thus, in addition to the works that founded the fields of quantum mechanics, set theory, numerical analysis, and game theory, we owe him the development of the operating principles of the digital computer.

The purpose of the commemorative year is to revive Neumann’s large-scale legacy that has an impact on our society, and to make it known to the public – throughout the country, with particular attention to the younger generations.

The NJSZT has already published some of the planned programs for the commemorative year:
• Festive start of the year: January 18, 2023, at the University of Óbuda, at the professional conference related to the Hungarian Informatics Day
• Interior exhibition straight from the salon of the Neumann family in Neumann’s alma mater, the Fasori Evangelical High School
• Memorial tree planting on the Tagore Promenade in Balatonfüred and mini-conference in the House of Jewish Excellence
• A conference at the Hungarian Academy of Sciences on the impact of his life’s work to this day
• Exhibitions of works received for the fine arts tenders called “Hommage à Neumann”.
• Publications of the Neumann album and biographical volumes, and related book presentations
• The Magyar Nemzeti Bank pays tribute to the anniversary by issuing a medal
• Literary evening from the works submitted to the sci-fi competition announced jointly with the magazine Galaktika
• Traveling exhibition presenting his life and lectures in many educational and cultural institutions of the country
• Appearances at IT university faculties (famous faculty days, OTDK, Hungarian Science Day, Researchers’ Night, Night of Museums)
• Memories related to high school IT competitions
• Neumann Kaleidoscope: the most complete collection of Neumann looks and displays:
www.neumann120.hu
• IT history city walks

If you agree with the above goals and wish to participate in their implementation, we will gladly accept your intention to join. The program series is also waiting for additional sponsors to apply!

About the Neumann Company

The János Neumann Society of Computer Science is the longest-standing Hungarian IT organization. Since its foundation in 1968, it has played a prominent role in creating equal digital opportunities. Among his activities, IT talent management stands out, in which he has been the main organizer of the Nemes Tihamér Competitions and the National Graphic Programming Competition for decades, as well as the trainer of the teams traveling to the student Olympics (IOI, CEOI, EGOI, eJOI, IIOT). It is the adopter and operator of the ECDL/ICDL exam system providing international certificates. He is the founder and maintainer of the History of Information Technology Museum located in the Szent-Györgyi Albert Agora in Szeged. The aim of the company is to act as the GPS of the digital world to help you find your way in the world of the information society.