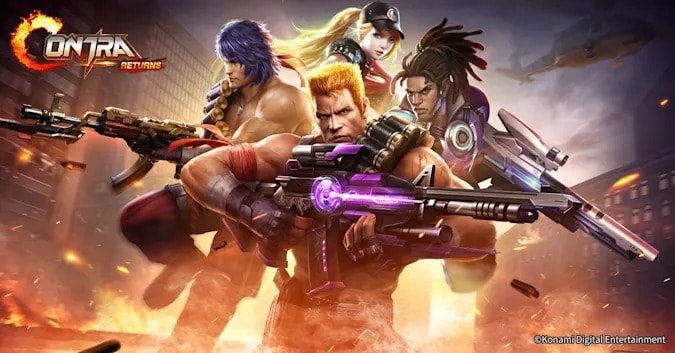 Konami is due to release one of its classic game franchises for US mobile devices in July, with the launch of Contra Returns for Android and iOS platforms. The game is being developed by TiMi Studios. The same team that’s behind the development of Call Of Duty: Mobile.

TiMi is also handling the development of another classic game franchise. In partnership with SNK, the studio is well into development of the upcoming Metal Slug Mobile game (not the official title).

Basically, TiMi Studios is no stranger to revitalizing these retro titles. With Contra Returns, players can expect rejuvenated graphics that have been updated to fit modern standards. As well as a plethora of levels to shoot your way through. Just like you did when sitting too close to the TV in front of your retro Nintendo consoles all those years ago.

Contra Returns will land on US mobile devices July 26

There’s still a few more weeks to wait before the game officially releases. According to Konami the plan is to launch Contra Returns onto both Android and iOS devices simultaneously on July 26.

This will be a free-to-play game, so players won’t be coughing up any cash to install it. Though players should expect micro transactions for some in-game items. What those will be exactly is unclear until the game launches.

Contra Returns will also bring a fresh take to the franchise as well as the genre. In addition to the standard solo gameplay, there will also be multiplayer battles. With “3-second matching and fair competition.” Multiplayer modes can support 1v1 or up to 3v3 too.

There’s also a One-Life mode which should prove a little more of a challenge for anyone that wants one.

Pre-registration is live now for the game

Whether you’re new to the Contra franchise or not, if this game interests you then you can pre-register for it right now. This goes for both Android and iOS players.

Konami doesn’t mention anything about pre-registration rewards, but there usually is with mobile games. So it might be worth it if you plan to play this game enough. As you could end up with some free in-game currency and other useful items.

Travel Through a Strange New World in Explorers