Samsung Galaxy A34 5G pops up on Geekbench with key specs

The Samsung Galaxy A34 5G we’ve been hearing about for over half a year is rumored to come with an Exynos 1280 SoC at the helm. But that likely won’t be the case since the smartphone has popped up on Geekbench with a different chip. 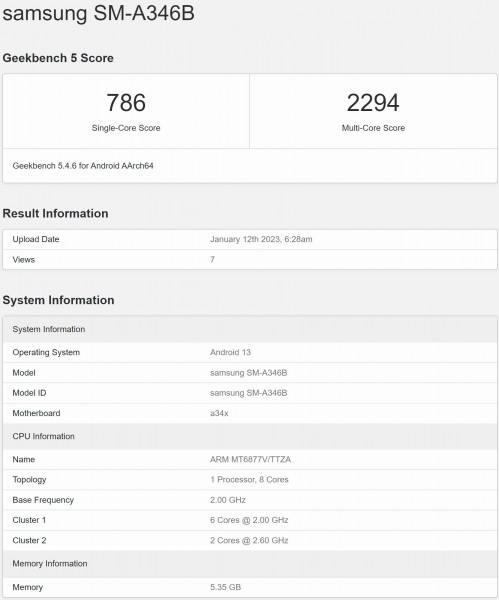 The Galaxy A34 5G that passed through Geekbench runs Android 13 and has 6GB RAM onboard. It scored 786 and 2,294 points in Geekbench’s single and multi-core tests, respectively. That’s less than what the Dimensity 1080-powered Realme 10 Pro+ achieved in our tests, but this could be due to the phone being a pre-production unit, and you can expect better performance with the retail version.

Rumors claim the Samsung Galaxy A34 5G will be similar to the Galaxy A33 5G, except that it won’t feature a depth sensor, and the three rear cameras won’t be housed inside a camera island.

Samsung will unveil new Galaxy A series smartphones in India on January 18. The Korean conglomerate hasn’t revealed their names yet, but those might be the Galaxy A34 5G and Galaxy A54 5G.

The 2022 Nobel laureate in physics is building a new type of quantum computer...