It’s Rishi Kapoor’s second death anniversary today. He died due to a prolonged illness. People, in large numbers, are sharing special posts in the memory of the late actor. And, the latest one to join the list is veteran actress Soni Razdan. She has shared a picture of Rishi Kapoor on Instagram Stories along with a note. She wrote, “We all miss you.” Soni Razdan has added some purple heart emojis to the post. She has also tagged Rishi Kapoor’s wife Neetu Kapoor, their daughter Riddhima Kapoor Sahni, and Alia Bhatt and Shaheen Bhatt, to the post. 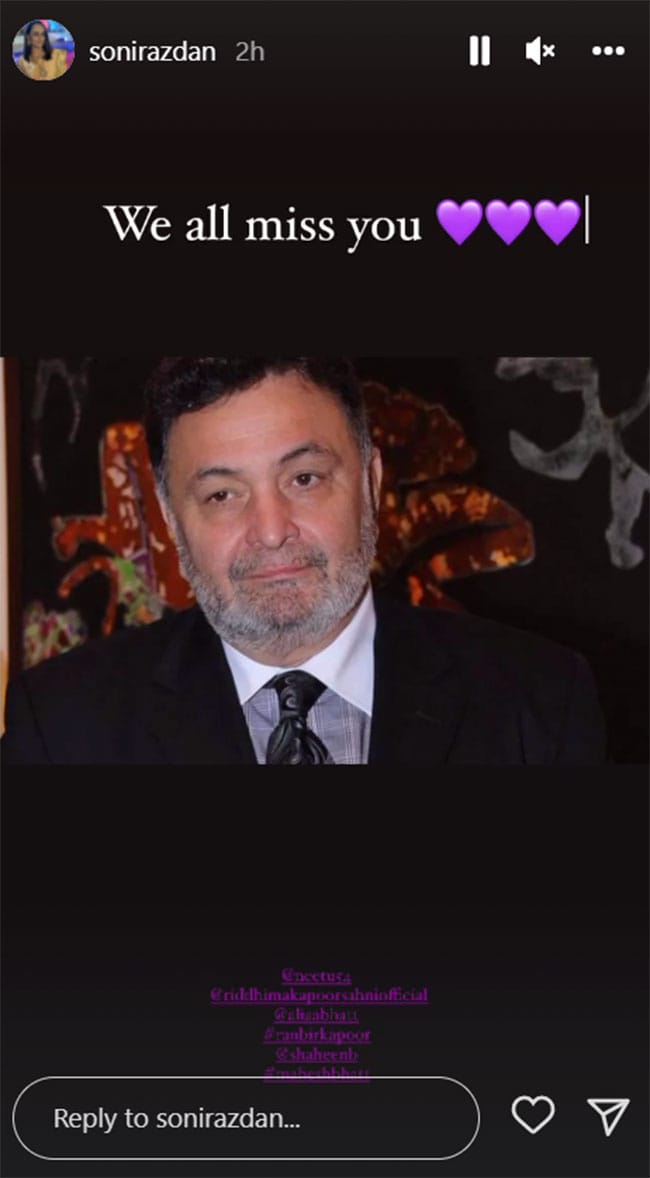 Alia Bhatt, earlier this month, tied the nuptial knot with Ranbir Kapoor. The wedding was attended by family members and close friends. The Kapoors and Bhatts dearly missed Rishi Kapoor during the wedding festivities. When Riddhima Kapoor Sahni shared the family portrait after Ranbir and Alia’s wedding, she wrote, “Family. Missed my dad so much.”

Rishi Kapoor wanted Ranbir Kapoor to settle in his life. And, Neetu Kapoor made it a point to come up with a special post after the wedding festivities were over. “This is dedicated to Kapoor Saab. Your wish has been fulfilled,” Neetu Kapoor wrote along with a picture featuring herself and Ranbir.

In one of the pictures from the Mehendi ceremony, Ranbir Kapoor is seen dancing with a black and white picture of Rishi Kapoor in his hand.

Alia Bhatt and Ranbir Kapoor will next feature in Brahmastra. The film, directed by  Ayan Mukerji, will hit the theatres on September 9. Amitabh Bachchan and Mouni Roy are also part of the project. Apart from this, Ranbir has Shamshera, directed by Karan Malhotra in the pipeline. The film stars Sanjay Dutt, Vaani Kapoor and Ronit Roy in pivotal roles. Ranbir is also part of Luv Ranjan’s next.

Plan A Plan B Review: Far Less Intelligent Than It Thinks...

Plan A Plan B Review: Far Less Intelligent Than It Thinks It Is

Apple revealed the release date for season two of...