Sridhar who spluttered after watching the Bengali film… Chaukar Janaki who fell at the feet of the director… Oh my gosh!!

1960 movie Padikatha Medhai starring Sivaji Ganesan, Chaukar Janaki and SV Ranga Rao. The film was directed by A. Bhim Singh. KS Gopalakrishnan wrote the screenplay and dialogues for the film.

Now we are going to look at an interesting incident that took place before the making of the movie “The Uneducated Genius”. In 1953, a Bengali film titled “Joke Beyok” was released. The film was a huge success during that period. Producer N. Krishnasamy had acquired the rights to remake the film in Tamil. Krishnasamy thought it would be good if Sridhar wrote the subtitles for this film in Tamil, so one day he called Sridhar and showed him the Bengali film. 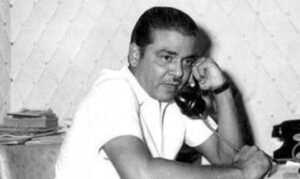 After watching the film Sridhar did not like the film. But without saying it openly, “I am currently writing the story lines for many films. So now I can’t work on this film. If you want, I will talk to my assistant, KS Gopalakrishnan,” Sridhar said and left from there thinking that it would be enough to escape.

After that Shivaji showed the Bengali movie to Ganesan. He also liked the film very much. He also admitted that he will definitely act in it.

Then Krishnasamy said, “Who will direct this film?” Shivaji asked Ganesan. He suggested several directors’ names for it.

Krishnasamy visited all the directors recommended by Sivaji Ganesan. But no one wants to direct the film. Krishnasamy came to Shivaji and told this matter. Gopalakrishnan, who saw the film, liked the film very much. “I should have written the dialogue for such a lively story,” he said with a smile.

Following this, the producer had the idea of ​​signing an attractive actress as the heroine for the film. After hearing this news, KS Gopalakrishnan, who came straight to see Krishnaswamy, suggested that “it would not be good to cast a glamorous actress in this film, Chaukar Janaki would be perfect”. He also decided to walk away from the film if any other actress was signed apart from Saukar Janaki.

One day K.S. Gopal Krishnan went to the shooting where Chaukar Janaki was acting. Chaukar Janaki, who met him then, said that tonight I have arranged a big party at my house. Please come.”

Accordingly K.S. Gopalakrishnan went to Chaukar Janiki’s house for a party that night. No one but him came there. “Nobody came to what party?” As he asked, Saugar Janaki immediately went to his room and came out with a garland. “If you call someone, they will come. I have not invited anyone but you” and put the garland on him. After that Chaukar Janaki fell at his feet and said, “You fought with the producer to cast me in a film starring a great actor like Shivaji. That’s what this party is for,” said Saukar Janaki.

“How do you know?” He asked, “Today I had a shoot at Neptune Studio. And there the producer Krishnasamy was telling Sivaji the message you suggested to cast me. Overhearing their conversation, the waitress came to me and said the same. After hearing this, I decided to give you a party to show my gratitude,” Chaughar Janaki said. KS Gopalakrishnan was moved when he heard this. This is how the movie “Patikatha Gentai” was born.