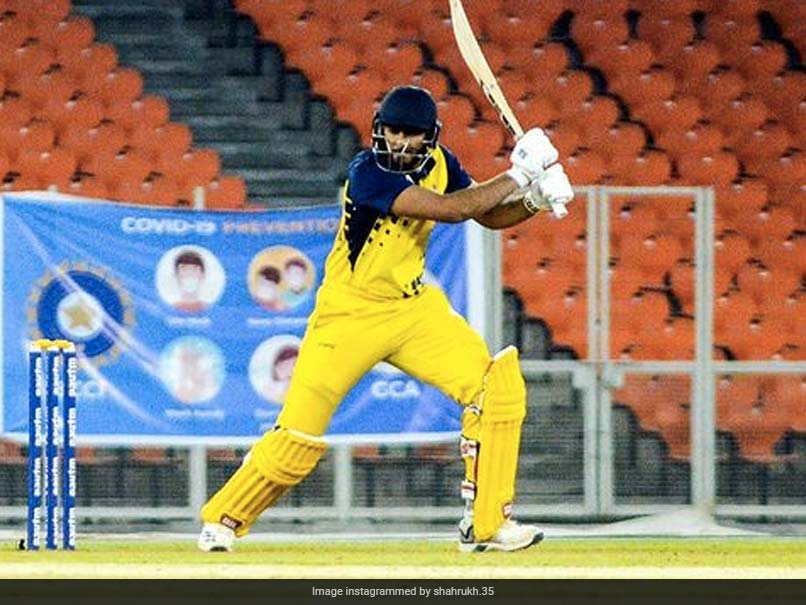 
Five needed off the last ball and it was Tamil Nadu batsman Shahrukh Khan who came to the party against Karnataka in the final of the Syed Mushtaq Ali Trophy at the Arun Jaitley Stadium on Monday. Shahrukh’s 33-run cameo off 15 balls helped Tamil Nadu win the thriller by four wickets. This is the third time that Tamil Nadu have won the Syed Mushtaq Ali tournament, having previously won it in 2006-07 and 2020-21. The side had also made it to the finals in the 2019-20 season and ended up suffering a loss against Karnataka.

A last-ball SIX from @shahrukh_35 does the trick!

Tamil Nadu hold their nerve & beat the spirited Karnataka side by 4 wickets to seal the title-clinching victory. #TNvKAR #SyedMushtaqAliT20 #Final

Chasing 152, Tamil Nadu got off to a quickfire start as Hari Nishanth and N Jagadeeshan put on 29 runs for the first wicket, however, the partnership did not sustain itself for a long haul as Nishanth (23) was sent back to the pavilion via a run-out in the fourth over. Sai Sudharsan then joined Jagadeesan in the middle and the duo kept on moving the scoreboard at a brisk pace.

Karun Nair provided the much-needed breakthrough to Karnataka as he dismissed Sudharsan (9) reducing Tamil Nadu to 51/2 in the eighth over. Karnataka bowlers managed to maintain a stranglehold, resulting in Shankar (18) and Jagadeeshan (41) dismissals and Tamil Nadu needed 57 to win from 28 balls.

Shahrukh Khan however changed the complexion of the game as he smashed 33 runs off just 15 balls, taking Tamil Nadu to a four-wicket win.

Earlier, Abhinav Manohar and Praveen Dubey played knocks of 46 and 33 as Karnataka posted 151/7 in the allotted twenty overs. Asked to bat first, Karnataka got off to a bad start as the side lost its first three wickets with just 32 runs on the board. Rohan Kadam (0), Manish Pandey (13), and Karun Nair (18) failed to stay at the crease for a long haul.

Sharath BR and Manohar put on 54 runs for the fourth wicket to bring some normalcy to Karnataka innings, and in the end, Dubey also chipped in with a 33-run knock as Karnataka posted 151/7 on the board. For Tamil Nadu, Sai Kishore scalped three wickets.

Beats is out with its first collaboration with its new Beats Studio Buds wireless earbuds. Today, the company announced that it is launching a...

The Best Websites To Create Animated GIFs For Free – #3 by ailihphilia –...

Don’t Ask Ananya Panday To Explain Her “Bathrobe In A Car” Series Because She Can’t. Just Enjoy