The 2022 Nobel laureate in physics is building a new type of quantum computer from HUF 36.5 billion 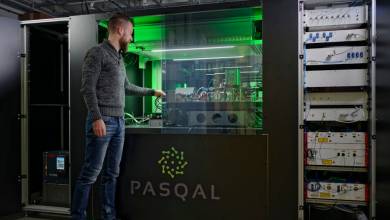 Founded by Alain Aspect and his colleagues, Pasqal’s designs are very different from trapped ion or superconducting quantum computers.

Paris-based quantum computing startup Pasqal has announced that it has raised a $100 million Series B funding round. In addition to Temasek from Singapore, Quantonation, the Defense Innovation Fund, Daphni and Eni Next, as well as the European Innovation Council (EIC) Fund, Wa’ed Ventures and Bpifrance threw in the money.

Founded in early 2019, Pasqal stands out from the increasingly crowded field of quantum computing startups because the company bets on the quantum computing technology of neutral atoms. This is a relatively new and potentially game-changing approach to building quantum processors. Instead of trapped ion (for example built by IonQ) or superconducting quantum computers (followed by IBM), quantum processors for neutral atoms use a laser to hold the atoms in place, which is essentially an optical tweezer, writes the TechCrunch.

It is easy to imagine that building a technology capable of trapping a single atom – and indeed only one atom – poses a unique and formidable challenge. But this problem is now largely solved. The advantage of this solution is that if we can trap hundreds of atoms at the same time, we can create a very dense qubit matrix on the one hand, and on the other hand, we can use holographic methods to rearrange it in the 3D space as required for a specific algorithm. And it’s all done at room temperature. This makes these machines more akin to FPGA (programmable logic gate arrays) devices than more traditional quantum processors. Pasqal talks about this process separately study also wrote They have the intellectual background for it, since Alain Aspect, who in 2022 He received a Nobel Prize for his work on quantum entanglement, co-founder of Pasqal.

As Pasqal co-founder and CEO Georges-Olivier Reymond said, the company has already demonstrated that it can control more than 300 atoms at once.

“It’s very difficult to hold just one atom in a laser beam and monitor and control it. But once we achieve that, we can almost easily scale it up and create arrays of any shape.”

– he explained. He also noted that qubits are similar to ion-based qubits in terms of coherence time and fidelity, but this flexibility and the ability to pack these atoms into a very dense array with only a few microns between qubits could be an advantage for this technology.

Reymond noted that now that some of these basic capabilities are in place, the team is working on building a quantum control system to begin executing quantum algorithms. And while there are startups focused on building quantum control hardware, none are optimized for neutral atoms, so the company decided to build its own system.

The Pasqal team is clearly quite optimistic about their system, and Reymond believes they’ll be able to demonstrate the “quantum business advantage” to potential customers in 2024. According to him, this will require a system of 200-300 qubits.

Currently, most researchers believe that the industry trend is not to use a single technology to solve all algorithms. Instead, different quantum technologies will find their niche to solve different problems. The team expects Pasqal to perform particularly well in solving graph-centric problems.

“There are a lot of computational challenges that can be transformed into the form of a graph. What we can do with atoms is represent the shape of that graph and embed the complexity of the algorithm into that geometry. Finally, instead of using thousands of quantum gates, we just by implementing a few, we can run our algorithm, and then we will be flexible against errors”

The company is currently working with companies such as Crédit Agricole CIB, BASF, BMW, Siemens, Airbus, Johnson & Johnson and Thales to help them understand where its technology can solve their business needs.