This accessory turns the Cybertruck into a cool camper

A simple pickup can be turned into a motorhome or even a mobile office with the help of the Space Camper.

2023 could be the year when car enthusiasts can finally get their hands on one of the most divisive cars of recent decades, the Tesla Cybertruck. The nineties low poly there is enormous interest in the vehicle that evokes his graphics, while many people do not even want to see the machine with a special shape, which caused a serious headache for the traffic authorities, because according to the original plans, neither a rearview mirror nor a windshield wiper would have been installed. Elon Musk wanted to replace the latter with a special laser solution, but so far they have not been able to develop this, so the few Cybertrucks that have already been released on American roads had to be retrofitted with these accessories.

The Cybertruck is already causing great difficulties for Tesla, its production has already had to be postponed several times. The situation now is that the deliveries may start next year, but knowing the company, we will be sure of this only if it actually happens, especially since by then it may already be nor will Elon Musk sit in the CEO chair.

Nevertheless, some companies have already appeared that see serious potential in the Cybertruck, as they have already started developing accessories for it. Such a Space Campers also a company called, which offers a special, modular rear cabin that can be attached to the platform of the Cybertruck – writes Electrek.

The accessory, which perfectly matches the style of the Cybertruck, according to the company’s promise, does not significantly increase air resistance, which, as we know, the most important factor is the range of electric cars regarding.

The Space Camper hides a comfortable double bed for two adults, which can be converted into a sofa if needed, or even into a mobile office, so you can work from the beach or the middle of the forest, if you don’t like the office environment so much.

A standard luggage rack can be attached to the top of the box, but even solar panels can be attached, which can be used to charge the Cybertruck’s battery. The good news for campers is that the mounted unit does not reduce the cargo space of the pickup, i.e. the platform remains fully accessible, even when the Space Camper is above it.

In the boxes that can be folded out from the back of the vehicle, there is complete kitchen equipment, including hotplates and a sink, but the Space Camper also comes with a collapsible shower cabin, which can be used to wash oneself, even in the middle of the wilderness. 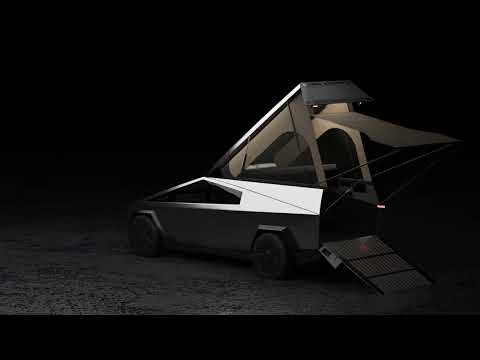 There is a so-called for those who are sensitive to their privacy privacy modewhen you can’t see into the tent-like sleeping cabin at all, but there is also a special stargazing mode, in which case one end of the bed slides out from under the roof so that you can lie on it and admire the night sky.

For the Space Camper, they are asking for 24 thousand dollars, i.e. more than nine million forints. Although the exact price of the Cybertruck is not yet known, according to information from automotive market researcher KBB, the starting price is expected to be around 50,000 dollars, which means just 19 million forints, while the version equipped with three electric motors will cost roughly 70,000 dollars, i.e. roughly 26.5 million forints then pay.

the electric car is not enough for climate goals

Two electric car manufacturers shed light on the depth of the problem with joint research. ...

Ubisoft has a way of dealing with toxicity among players. From now on, the game will be able to enter … the police?

Playing any multiplayer game, we have certainly encountered all kinds of insults or even threats from players sitting...

Which bat to buy to hit big sixes? | How to buy a Professional Cricket Bat?

As the first match was a draw, the...

OnePlus copies the best that Samsung offers its users