Vijayakanth’s song that no one has ever done in Tamil cinema.. Adengappa!! All the songs featured in the movie “Bharathan” were huge hits. In particular, the song “Punnagai yil Dimitri” featured in it is still a very popular song.

Vijayakanth had not given so much importance to dance in any of the songs in the many films he had acted before. But Vijayakanth had done a dance that no one had seen till then in the song “Punnakaiil Elektrim” featured in the movie “Bharathan”. Her dancing in the song was very stylish and peppy. 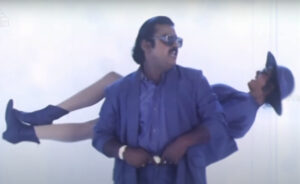 Will Vijayakanth dance like this? The dance was surprisingly arranged. Prabhu Deva was the choreographer for the song. Prabhu Deva had brought Vijayakanth’s never seen stylish dance in the song. In this situation, the famous comedian Robo Shankar shared a rare information about the song “Punnakaiyil Dimitri” at Vijayakanth’s 70th birthday party.

Also Read: What Bhagyaraj did was a good thing… but Shivaji was angry at Chattun!! So what happened??

“Smile in the movie Bharathan, the song Electricity has almost 182 cuts. The song was sung by Ilayaraja. Prabhu Devadan is the choreographer. Vijayakanth danced beautifully. A song with 182 cuts has never been released in Tamil cinema till now,” Robo Shankar shared this rare information at the event.