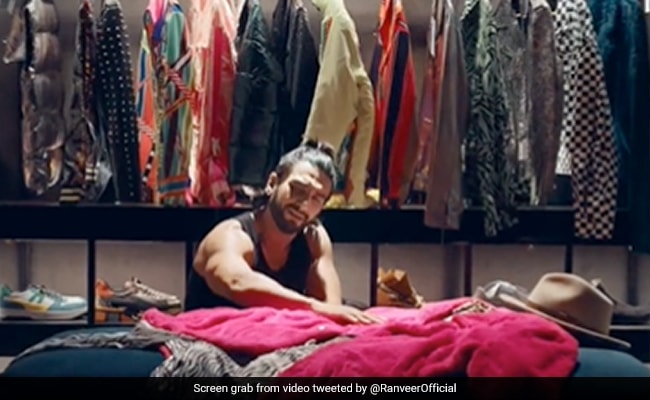 Ranveer Singh is all set to explore the wild in the upcoming episode of Ranveer Vs Wild With Bear Grylls. In the trailer, which was released earlier, the actor, sporting his camouflage pants and a t-shirt, and running across a green field, surviving thick jungles and also trying to find a rare flower for wife Deepika Padukone. As the episode is about to drop on July 8, Ranveer posted a hilarious video about how he had to style himself before shooting for the adventure show and leave his “wardrobe behind.” The clip, shared on Twitter, shows Ranveer bidding adieu to his clothes, hanged nicely in a walk-in closet, and crying dramatically. Soon, in a flash, Ranveer is seen wearing camouflaged pants and a t-shirt to star in Bear Grylls’s episode.

In the caption, Ranveer wrote, “You know things are getting serious when I left my wardrobe behind and picked camo pants instead. Get ready for a Ranveer you’ve never seen before!” and added the hashtag “Ranveer Vs Wild With Bear Grylls.”

You know things are getting serious when I left my wardrobe behind and picked camo pants instead. Get ready for a Ranveer you’ve never seen before #RanveerVsWildWithBearGrylls Netflix India’s first interactive special arrives on July 8! pic.twitter.com/0tqQYrjM6i

Earlier today, Ranveer shared a photo of himself dressed in an eccentric leopard print shirt with pants and a pink fur overcoat. Referring to his clothes, the actor, in the caption, wrote, “This Sher (lion) is leaving the shehar (city) for the wild. You won’t believe what I had to give up for this journey of a lifetime! But pyaar ke liye sab chalta hai. Watch this space to see all the wild things I do for love.”

Meanwhile, Ranveer Vs Wild With Bear Grylls will release on July 8 on the streaming giant Netflix. The actor will later feature in films like Rocky Aur Rani Ki Prem Kahani and Cirkus.

“There Are Better Fast Bowlers In Indian T20 Cricket Than Shami”:...

“There Are Better Fast Bowlers In Indian T20 Cricket Than Shami”: Ricky Ponting