According to a recent report by WABetaInfo (via 9To5Google), WhatsApp is currently testing end-to-end encryption for cloud backups.

FYI, end-to-end encryption is a big part of WhatsApp’s base. Notably, all chats on the app are end-to-end encrypted. The benefit of this is that no one, except you and the recipient, will be able to view the message or the media that you share among yourselves.

Unfortunately, this important end-to-end encryption feature is not supported for cloud backups, when you are using Google Drive, or iCloud.

So, for security, you depend on the protection and security features that these cloud storage services offer. Moreover, WhatsApp even offers a warning when you perform cloud backup, “Messages and media backed up in Google Drive are not protected by WhatsApp end-to-end encryption.”

The good thing is the company has understood the need of the hour and has begun testing the new end-to-end encryption for cloud backups.

The end-to-end encryption feature for cloud backups was spotted on WhatsApp v2.21.15.5

That is, if you, by any chance forgot the 64-digit encryption key, then you would lose all the content stored in the cloud backup.

Users have been requesting WhatsApp for encrypted cloud backup feature. Finally, it seems like the company is on the right track. Additionally, it also feels like this feature may see the light of the day pretty soon.

Whatever the case may be, it is nice to see the company is already working on the cloud backup encryption feature. It is not clear at the moment how widespread this user test is running. Safe to say, the feature is live only for a small pool of users. 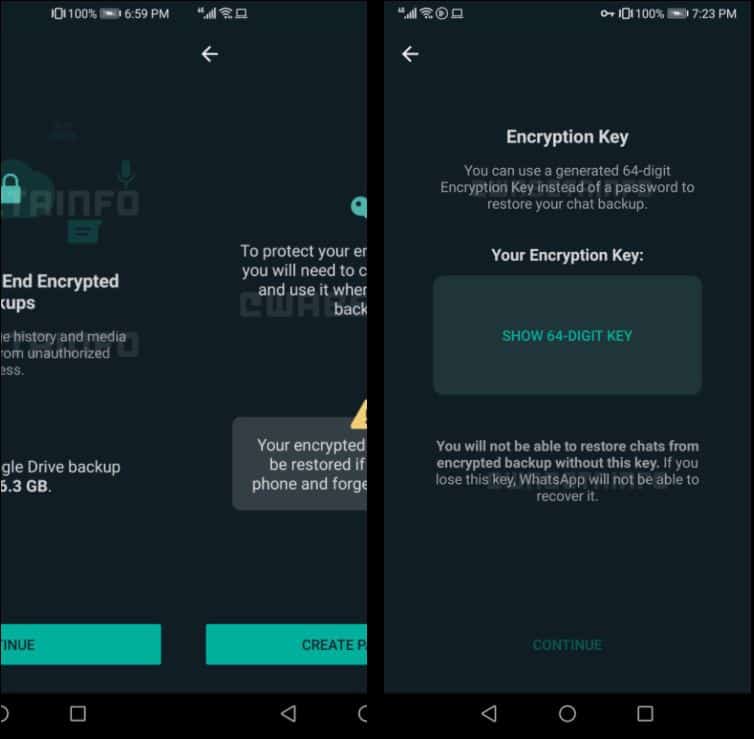