You can now buy Roborock’s most advanced vacuum cleaner ever 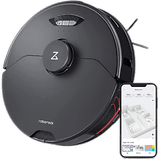 
Launched in January this year, Roborock’s flagship S7 MaxV Ultra robot vacuum cleaner is finally available in the US and in select European countries. The high-end vacuum comes with an all-new Empty Wash Fill automated docking system, which is a first on a Roborock device.

Unlike the dock on the Roborock S7 MaxV Plus, which is limited to dust emptying, the Ultra’s sophisticated hands-free dock includes automatic mop washing and water refilling on top of the dust emptying feature. The dock is capable of cleaning the surface of the robot vacuum as well as its own base. Simply put, this entirely removes the need for users to clean the dock or the vacuum.

Aside from self-cleaning, the Ultra model can also recharge automatically by going back to the dock similar to the recently launched Roborock Q7+ Max and Roborock Q5+ vacuums. The Ultra model now boasts 30 percent faster charging speed while supporting the off-peak charging feature. Additionally, Roborock says that the dustbin on the Empty Wash Fill dock could last up to eight weeks before getting full.

In terms of specifications, all the Roborock S7 MaxV variants share the same 5100Pa suction power and Lidar navigation system. The vacuum intelligently detects and avoids waste materials while it automatically lifts the mop when a carpet is present. An RGB camera and microphone are also available which users can use for calling their pets or give voice commands to Alexa or Google Home through the latter.

The differences between the different S7 MaxV models are the pricing and bundled docking system. The S7 MaxV Ultra gets the Empty Wash Fill dock for $1400 (€1500) compared to the S7 MaxV Plus that comes with an auto-empty dustbin at $1160 (€1000). Buying the S7 MaxV variant for $860 means you’re only getting the robot vacuum cleaner device without any docking systems.

Alternatively, Roborock is selling the Empty Wash Fill dock as a separate product for $700 and the Auto-Empty dock for $300. Pre-order is open on the Roborock online store with an estimated shipping date later this month. Both Amazon and Walmart are yet to restock the S7 MaxV Ultra and S7 MaxV Plus.

Are you willing to spend more than $1000 on a premium smart robot vacuum with self-cleaning features? Let us know your thoughts.