Ajith’s much awaited movie “Thunivu” has released in theaters today. Along with Ajith, Manju Warrier, Mahanadhi Shankar, Samuthirakani, John Cocken, Aamir, Bhavani, CP, Prem Kumar, Mohana Sundaram and many others have acted in this.

“Courage” movie by H. The film is directed by Vinod and produced by Boney Kapoor. Ajithkumar-H.Vinod-Boney Kapoor had previously made films like “Encountered Vision” and “Valimai”. But these two movies did not impress the fans that much. In this situation, the third film of their alliance “Thunivu” attracted the fans? Isn’t it? Let’s see now. 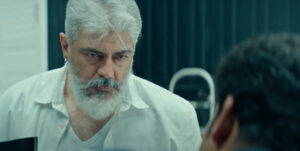 A gang plans to rob a bank called “Yours Bank” which has the largest number of customers in India and enters, unexpectedly Ajith also robs the bank and brings the robbery gang under his control.

The responsibility of saving the public trapped inside the bank by the robbers and the responsibility of catching Ajith comes to Commissioner Samudhirakani. Many people think that Ajith is robbing the bank, but Ajith is making people aware of how the bank is robbing people’s money. Why does Ajith do that? Did Ajith escape in the end or not? That is the rest of the story. Ajith’s reign throughout the film. Ajith is intimidating in his gun-toting style, in his dialogues, style, clothes and behavior. Director H. Vinod has slightly changed the mannerisms shown by Ajith in many movies before in the movie “Thunivu”. Ajith has scored a completely villainous performance after the movie “Mangatha”. Ajith’s every move is a firecracker.

Always in a top starrer movie the heroines don’t have that much scope. But H. Vinod has given more scope to Manju Warrier in this. Like Ajith, Manju Warrier is also involved in action scenes. Gunshots and gunshots are heard in the movie. The first half is full of action scenes. In the second half, many surprising things are said about money and how banks cheat their customers with credit card and loan features. While the first half of the film moves at a jet pace, the second half is a bit slower. Similarly, many logical violations accumulate throughout the film. In Tamil cinema, it is a written rule in commercial movies that the mass hero does not get hurt in action scenes. For that “like this?” Some scenes are like that. And they forgot the logic in the climax scene.

The biggest plus for the film is Gibran’s music. He has given excellent music according to the pace of the film. Although the film has only three songs, the way it has been presented is excellent. Similarly Nirav Shah’s cinematography and Vijay Velukkutty’s cinematography are the biggest strengths of the film. H. Vinod has been very clear that there should be no unnecessary scenes. This is a great comfort to the audience. 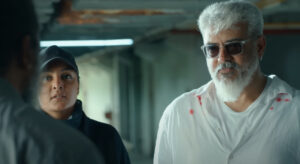 How does the banking system deceive the public? Why is man so obsessed with money? H. Vinod has created a screenplay based on such questions. Although there are many logical holes in the film, the director H. Vinod has told the story very well. Therefore, fans can confidently say that this Pongal is a “Thunivu” Pongal.